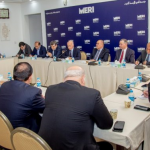 MERI —- The Iraqi Federal Supreme Court (FSC) decreed on 15 February 2022, that the Kurdistan Regional Government’s (KRG) export of oil is unconstitutional and that their contracts with international companies are illegal. Thereby, empowering Baghdad to undermine the KRG’s financial independence. The Kurds see this as a politically motivated decision and a direct consequence of the political arm-twisting that accompanies the negotiation process in forming a new government in Baghdad.

To debate the impact of the FSC decision and the way forward for the Kurdistan Region of Iraq (KRI), the Middle East Research Institute (MERI), organised a round table discussion under Chatham House Rules on 21 February 2021. This meeting was attended by a selected group of political leaders, policy makers, academic experts and civil society leaders (listed below). In this report, a summary of the discussions and recommendations are presented.

The debate was framed around two fundamental issues:

First: The KRI’s financial and economic independence is one of the main pillars of keeping the Region as a thriving entity. As a rentier Region, however, the KRI relies heavily on oil and gas revenues. Therefore, the decision by the Iraqi FSC, which described the Region’s oil and gas management as illegal and unconstitutional, was a blow to the KRI both as an entity and to its governing system. This Court decree is binding and not subject to appeal, therefore the KRI must handle it very carefully.  The important questions for the KRG and KRI political parties are:

Second: During the last October’s general election, the Shiites, Sunni Arabs and Kurds appeared fairly fragmented.  After the election, the Sunnis swiftly united their disparate groups under a broad collation and struck their first victory, winning the Speaker position at the Council of Representatives (CoR). They are poised for more gains in the near future.  The Shiite groups are still in the same position as before, and are negotiating intensively to reach an agreement on the formation of the government. The Kurdish parties however, came out worse than they started. Initially, they sounded modest and optimistic, emphasizing unity in Baghdad in the face of common challenges. Their debate was focused on securing a the KRI’s share of the budget, demilitarization of the Disputed Territories and resolving Article 140 in addition to other outstanding issues. But this did not last long, and the main Kurdish parties engaged in separate negotiations for the formation of government in Baghdad. In the process, they deepened their division and fragmentation. As a consequence the Kurds, collectively, emerged much worse off compared to the other Iraqi components. Relations, particularly between the Patriotic Union of Kurdistan (PUK) and the Kurdistan Democratic Party (KDP), have visibly deteriorated.  Some were accused for further dividing the Shiites and deepening their internal conflicts. These divisions weakened the Kurdish parties and paved the way for the FSC decree, as a way of penalizing the KRI and its ruling parties.

Fortunately, it is not too late to tackle these complex issues and reverse the down-spiraling trend. The key questions are: